The only Alice Coltrane album I own, and so therefore also the only one I have listened to, isJourney in Satchidananda, an album which for some peculiar reason I once got sent years back when I renewed my subscription to The Wire magazine. While my musical tastes have generally wandered off in other directions I do remember really enjoying the richness of that album, a kind of warmth and dense layering of sound that appealed to me a lot in my mid twenties. Its kind of fitting then that my head was turned towards tonight’s CD by an email recommending it to me by The Wire’s current editor- fitting in that the CD in question, the disc by the Australian/European Hammeriver septet is dedicated to the spirit and music of Alice Coltrane, and attempts to re-envisage the feel of her music through this new CD. It is actually a thoroughly beautiful album.

The disc is released on the Russian Mikroton label and features recordings made back in 2007 by the group of Clare Cooper, (harp) Chris Abrahams, (piano) Christof Kurzmann, (lloop) Tobias Delius, (clarinet and tenor sax) Clayton Thomas, (double bass) Werner Dafeldecker, (double bass) and Tony Buck (drums). The music is described in the liner notes as composed by the group, but while it feels like their has been some degree of mutual agreement on the general feel and shape of at least some of the five tracks, perhaps even some definite direction on one or two of them, I doubt that there was very much of anything written down, and the detail of the music at least is all improvised.

It is however, a thoroughly gorgeous album. The piece all tend to move slowly, often beginning with simple motifs such as simple piano patterns or swaying bass moans but they build into a beautifully detailed mass of carefully layered washes of sound, on the surface all rising together in harmony, if listened to carefully all made up of small elements pulling in different directions but still coming together as a whole. Generally speaking the basses underpin everything with a heaving warmth, which is offset by Kurzmann’s grainy, gritty laptop sound, with Buck spraying mostly cymbal splashes about between them. On top, the sax occasionally breaks out into tiny fragments of jazzy expression, and the harp and piano pick out a mixture of sparse ringing notes and little bits of melody. The impact of it all together, particularly in the midst of the swells of sound that the group push themselves into is truly inspiring, really richly detailed and demanding that you drop everything and listen deep down into the music’s strata. It all still sounds wonderfully controlled however, even with seven musicians playing together the album doesn’t ever feel like an overworked soup, there is a clarity and simplicity to the shape and structure of the music that was probably pre-determined but still sounds thoroughly organic.

If the album sets out to pull the emotional boldness of Coltrane’s music into a modern setting then I think it succeeds very well. The music here is no challenge to the listener, and makes no claims to originality, but it really is quite powerfully beautiful, thoroughly seductive and embracing, particularly when turned up loud, so allowing the listener to immerse themselves in it entirely. There are little tinges of jazz in there, tiny reminders of the music’s heritage, but in general the link to Coltrane’s music is mostly through the amorphous, glowing, overwhelming grandeur of the music, a no-holds-barred attempt at envisioning ecstasy through sound.

This is a really lovely album, one of the best recordings by a largely acoustic improv group this size I have heard. It is very easy listening, but it took no small amount of skill and musicianship to produce such a work. It also comes wrapped in a beautiful digipack adorned by screen prints by Cooper, who produced the album, and given that she shares her choice of instrument with Alice Coltrane was probably the instigator behind this release. Heartwarmingly uplifting music. I am so glad it was recommended to me and am more than happy to do so to you.
Posted by Doubleclayton at 1:27 PM No comments: 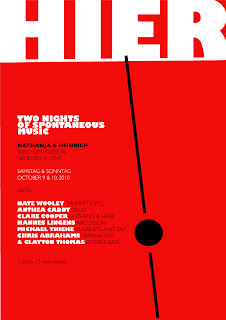 Nate Wooley, a dear friend, and long time sweet heart (so to speak) is coming to Berlin for 3 days in October. The first time we met was in 2001 I think, we had a trio play in New York with Tatsuya Nakitani - we played Mopti for a long time and I struggled my way around the bass. He was very understanding.

After ten years, everything should be a little more refined - an all plus situation.

Nathanja and Heinrich have been very nice to let us return after twice opening up for us.

and GERM STUDIES with Clare and Chris
(for a long time now, my favourite band in the universe)
www.germstudies.com reveals much.


I'll update the survival method through the various countries, situations and time zones between then and now.
Posted by Doubleclayton at 11:34 AM No comments:

Elizabethkirche - Mitte,
improvising in the spirit

- kind of a cross movement between drone-swing and textural stasis.
but nicer.
Posted by Doubleclayton at 3:56 AM No comments:

my thoughts are provoked!
Posted by Doubleclayton at 6:47 AM 1 comment:

One of the lectures I was doing in Singapore was on the role that race relations played in the formation of American music. I was coming from the point of view of someone who grew up listening to hip hop and soul, then jazz, then swing, R&B, modern jazz, free jazz... onwards.

I made the analysis that in the end, the driving force of American music has been survival. Primarily as the first co-created environments between black and white Americans were in the Church, and the church was a means for Slaves to prove their humanity - by becoming christians. And by such, be accepted as 'men'. By combining the western christian song, belief system and environment with the still remembered song / sound / dynamic of African traditions, the first American gospels were sung.

My personal point at the end of all of this was, that, as a white Australian, I'm looking for a music and honesty in creativity that isn't reflective of a distant, un-related tradition - which is why I look towards total improvisation as an answer.

A student at the end of the lecture said to me 'so - you are saying is when you find your true personal truth, you can shoot the true arrow of love'

Go Anson.
Posted by Doubleclayton at 1:20 AM No comments:

the land of a thousand chances

So, it's the second week of September. On the 1st I got on an evening flight to Singapore. 14 hours of no TV, no vegetarian meal, but some leg-room, fun. I tried to read Aldus Huxley's "Island", and managed it until too many people fell asleep in my presence and the reading lamp proved too invasive. I'm a people person in the end, and i could hardly keep my eyes open - but my brain refused to follow my retina into darkness.
I was in Singapore as Artist in Residence at Lasalle College of the Arts - which was an official channel for my dear colleague and 'head of school' Tim O'Dwyer to get me into the country to record a new trio record. After a week of 16 hours a day as performance coach, history teacher, race relations ambassador and all-round teen-mind-blower, we got a great record made - so, that was exciting. Big props to Maggot Brain for his haircut and Jeremiah for substance.

Home for a night with Paul Lovens and Ignaz Schick for the inaugural 'Echtzeitmusiktage' hosted by the saxophonist of the same name. I was too tired to know how it went on the inside, but on the outside we had a great night.

In passing - I'm not much of a write about myself person, and really, the idea of promoting concerts, or in fact, the very idea that anybody might want to read what I'm up to is a bit out - but for the sake of feeling that there is some sense of the rather odd planet I'm living on, then why not get to work....kind of a book for me at least, to look back on and say - oh - i remember that train trip - the snow storm in Brno that looked like the fuzz of an un-tuned TV station. (for example.

I'm concerned that the year is perceivable in closed fist of a three month calendar. :


Hammeriver in Berlin, Trio Aus in Salzburg, Nickelsdorf and Utrecht, The Ames Room in Glasgow, Edinburgh, Leeds and London, Contrabass in Korea, Nate Woolley and Friends in Berlin, Treffen in Belgium, Astronomical Unit, Gebhards Bass X 3 and Kellers Killers in Sibiu, Strike in Densites and Ostrava, Ella Speed in Swizerland, Thymolpholein in Wels, Ames Room in Ljubiana, Vienna and Brno, Splitter Orchster at Radialsystem, Corkestra in Holland, Ames Room in Tours, Paris and Ghent, KBKB in Vienna and Graz...and that's the end of the year with three days rest.

Surely there is a way to use a blog productively. But I've never been Lindsay Lohan basher...?
Posted by Doubleclayton at 1:05 PM No comments: